Today I met with Matthias Kranz in Munich. Besides discussing his thesis I got to see his new car (a prius) – quite impressive and interesting interfaces. Later I met with Wolfang Spießl who started recently his PhD in cooperation with BMW – again seeing an interesting and impressive (test)car.

It is really curious to see that there is a lot of interest in the hobbyist communities on car interfaces and protocols. In the June/2007 issues of Elektor (http://www.elektor.de/) was an article on a OBD-2-analyser, in a recent issue of the EAM (http://www.eam-magazin.de/) was a similar article and there are many community sites on the WWW, e.g. http://www.canhack.de/

Perhaps we could do in one of our pervasive computing related classes a project on this topic? There are so many technical opportunities and the challenge is to find the convincing applications!

Today I was reminded of a discussion in 1998 on the implications of computing technologies becoming cheaper and cheaper. Even then it seemed inevitable that many artifacts will include computational and perceptual qualities. The discussion was in the context of the European project TEA (technology for enabling awareness) where we built a context-aware phone [1]. Walter van de Velde suggested imagining that processors, sensors, communication will only cost cents (or will be virtually free as part of the production process) and we worked on the question: what products and services will emerge? One generic answer then was than any product of a value 20$ and above will include computing and sensing capabilities, if there is any (even a minimal) advantage achieved by this.

Michael Beigl made it more concrete and found coffee mugs (which were more than 20$ each) and attached a processor, communication and sensors. The MediaCup [2] showed several interesting results and underlined that such approach makes sense if there is an advantage.

Today I saw in an office of a former colleague in Munich two objects that had perceptual qualities and output (not really processing yet). One object is a plastic toad that makes a noise when you move and the other is a rubber pig that makes a noise when you open the fridge (reacts on change in level, but did not work). This made me wonder if we were only partially right – yes objects will have sensors included, yes there will be processing, but no there is no need that it makes sense. Or perhaps having it as a gadget is advantage enough… 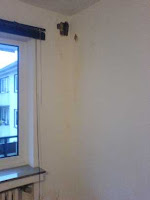 This morning a heating and water technician checked on the wet spots on my wall in my new flat in Essen. Using a hygrometer he looked for the area which is most damp and then he broke a hole into the wall. After opening the wall, it was very easy to see that the outside wall is wet and that the heating is OK.

The hole in the wall does not really look good 🙁

This makes me wonder when building materials, with sensing included will move from the lab to the real world. Pipe insulation, plaster boards, stones with integrated sensors would be quite easy to create and there are ideas to do it in a cheap and easy way. In the context of Pin&Play (later Voodoo I/O) we explored some ideas but never completed the prototypes for real use. Perhaps this could be an interesting project…

I was today in Karlsruhe at Learntec, a trade fare and congress for technologies in learning, training and education. Alois Ferscha organized a session on pervasive computing and learning.

My talk was entitled “back to the roots – technologies for interweaving learning and experience”. I stared out with the question: What is the difference between an apple tree and a biology book. In essence my argument is that (1) first hand experience can not be replaced, (2) we need consolidated knowledge based on the experience to learn efficiently, and (3) pervasive computing technologies can bridge the gulf between them.

It seems that in the research community a lot of people are convinced of interactive public spaces and interactive window displays. Over the last month I have see great visions and ideas – as well as reflected on our own multi-touch ideas for interactive shop windows.

The installations I have seen in the real world however are at best boring (and often not functioning at all). It seems that even a student-project-lab-demo is more appealing and works at least as realiable. 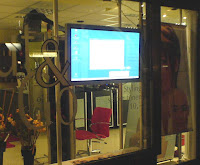 Especially combining sensing (e.g. simple activity recognition, context) with low threshold interactive content seems to have great potential. If there is somebody interested in really cool stuff for a shop window (attention grabbing, eye catchers, interactive content, etc.) – talk to me. We are happy to discuss a project proposal 😉 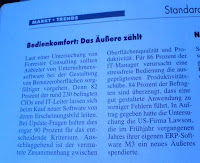 In the news section on standard software in the Germany IT magazine IX a Forrester Consulting survey was quoted that provides some evidence that UIs matter. . The survey states that for over 80% of CIOs and heads of IT departments the user interface is critical when they make buying decisions. (photo of the article is from IX 2008-01)

The IX magazine is typically more technically oriented and I think little article underlines a trend that happens: people responsible in IT realized how vital the interaction between users and systems are. In my eyes optimizing the user interface is in many business applications the “low hanging fruit” to optimize efficiency and eventually ROI.

When I was still in Munich we worked on the PERCI project together with DoCoMo Euro-lab. This collaboration was very fruitful, as all partners had a deep understanding what they are doing an where technically excellent.

After my moving we finally found some time again to discuss project ideas. There are many options in the mobile domain and we found some interesting topics related to advertising where their expertise and our expertise could create interesting synergies. 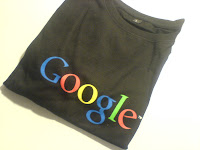 Recently Frank Spychalski (a student from Karlsruhe University 1999) contacted me and told me that he is now with Google in Munich. As we were in Munich anyway we took the chance to meet (and as the schedule was already full breakfast was the only time slot left).

The office in Munich is close to Marienplatz, the very central spot in Munich. They are currently setting up an engineering team. It looks like a great place to work. Perhaps there may be options for some of our students to do an internship in the future.

The visit at Google reminded me of the android developer challenge. The deadline is beginning of March – perhaps there is still some time to motivate some students to create something interesting…

In contrast to us people in the medical domain seem to start early in the morning. In the process of preparing a project proposal we visited the Elisabeth Hospital in Essen. We got the chance to see some invasive heart exams first hand.

It is impressive how well such complex processes run and how quick the staff can assess the conditions. Looking for potential to make theses processes easier is a touch challenges – espcially if you do not do this by sitting at your desk but if you want it to be realistic. In the discussion with the head nurse it became apparent that user centred design is probably the only way to really make a difference.

Processes are structures but nevertheless the real world is complex and messy. One thing we saw even in our short visit is that technology introduced must not make things slower – not even a single step.

In our conclusion we found a number of interesting issues – in particular with regard to the electronic patient record – that are worth while to push forward.

Today we had a group of pupils (high school students) visiting our department. The kids are from schools in the Duisburg/Essen area and have a keen interest in math. They meet regularly with people at University to learn more about the subject.

Living in our own world where everything seems related to pervasive computing it is good to sometime realize that this is still an alien topic. We gave a quick introduction, defining user interface engineering and pervasive computing and then showed two demos of student work in progress (multi-touch displays and driving simulator).

Perhaps some of them are convinced and will start studying with us in the future. With such event it becomes apparent that we should invest more effort to show people and in particular pupils how cool CS is! I would expect if more people realize what computer science really does and what products and services depend on it we would have more applicants as a discipline.