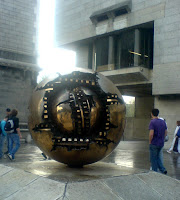 After the exam board meeting at Trinity College in Dublin (I am external examiner for the Ubicomp program) I went back with Mads Haahr (the course director) to his office. Besides the screen on which he works he has one extra where constantly the log entries of his web server is displayed. It is an interesting awareness devices 😉 some years ago we did a project where we used the IP-address of incoming HTTP-requests to guess who the visitors are and to show their web pages on an awareness display [1], [2]. Looking back at web visitors works very well in an academic context and with request out of larger companies where one can expect that information is available on the web. Perhaps we should revisit the work and look how we can push this further given the new possibilities in the web.

The web-server Mads has in his office is pretty cool – it provides true random numbers – based on atmospheric noise picked up with 3 real radios (I saw them)! Have a look at the service for yourself: www.random.org. It provides an HTTP interface to use those numbers in your own applications. I would not have though of a web service to provide random numbers – but thinking a little more it makes a lot of sense… 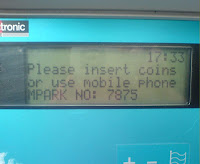 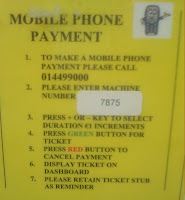 Wherever I meet with companies at the moment one of the first questions is “do you have good students – we need people…”. It seems good computer science skills are useful 😉 However to me it is not clear why so few people go into this field. Here is my favorite short list what you should have to study CS: (1) you are creative; (2) you are communicative; (3) you solve problems systematically; (4) you have an ability to generalize.

In Gelsenkirchen (just 15 minutes on the train) was today a conference on accessibility “Einfach für Alle” (easy for all). http://www.einfach-fuer-alle.de/tagung/

I was invited as an expert in the workshop on business opportunities for the internet of the future and of assistive technologies. The workshop was moderated by Thomas Hänsgen and the other experts were Arthur Ortega (Yahoo!) and Günther Weber (Vodafone). The discussion was very lively and I learned a lot! Some results of the discussion are online at the workshop website.

To start with everyone had the opportunity to give some statements – I had the following: (1) digital assistance will enhance the capabilities for everyone; (2) contextualizing services will increase locale interaction; (3) user generated content will help us to make the real world more accessible. See the slides with topics and examples (in German).

We made our plans for setting up a company for creating a unique learning experience more specific. Uwe Bayer from Fraunhofer IAIS used in our discussion the phrase “don’t play to run company – really run a company” – which I think describes the essences of we would like to achieve. We plan to have some detailed information (and the recruitment process) out by the end of the month. If you are a student close to finishing your studies AND you have academic skills in your subject AND you have the drive to create a start-up THEN you should contact me in the beginning of June – we look for about 20 people with IT and business background that like to take a risk!