Today I was at CDTM in Munich (http://www.cdtm.de/) to give a lecture to introduce Pervasive Computing. It was a great pleasure that I was invited again after last year’s visit. We discussed no less than how new computing technologies are going to change our lives and how we as developers are going to shape parts of the future. As everyone is aware there are significant challenges ahead – one is personal travel and I invited students to join our summer factory (basically setting up a company / team to create a news mobility platform). If you are interested, too drop me a mail. 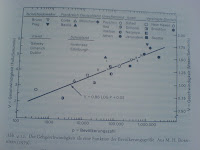 Over lunch I met with Heiko to discuss the progress of his thesis and fishing for new topics as they often come up when writing 😉 To motivate some parts of his work he looked at behavioral research that describes how people use their eyes in communication. In [1] interesting aspects of human behavior are described and explained. 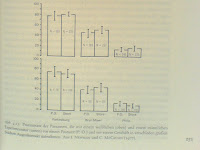 I liked the page (251) with the graphs on walking speed as a function of the size of city (the bigger the city the faster people walk – it includes an interesting discussion what this effect is based on) and the eye contacts made dependent on gender and size of town. This can provide insight for some projects we are working on. Many of the results are not surprising – but it is often difficult to pinpoint the reference (at least for a computer science person), so this book may be helpful. 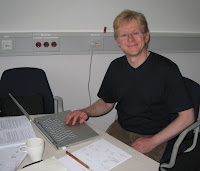 Hans Gellersen, who was my supervisor while I was in Lancaster, visited our lab in Essen. We discussed options for future collaborations, ranging from student exchange to joined proposals. Besides other topics we discussed sustainable energy as this is more and more becoming a theme of great importance and Pervasive Computing offers many building blocks towards potential solutions. Hans pointed me to an interesting project going on at IBM Hursley “The House That Twitters Its Energy Use“.

At the Ubicomp PC meeting we recently discussed the value of face-2-face meetings in the context of scientific work and it seems there are two future directions to reduce resource consumption: (1) moving from physical travel to purely virtual meetings or (2) making travel feasible based on renewable energies. Personally I think we will see a mix – but I am sure real physical meetings are essential for certain tasks in medium term. I am convinced that in the future we will still travel and this will become viable as travel based on renewable energies will become feasible. Inspiring example project are SolarImpulse (its goal is to create a solar powered airplane) and Helios (solar-powered atmospheric satellites). There are alternative future scenarios and an interesting discussion by John Urry (e.g. a recent article [1], a book – now on my personal reading list [2]). These analyses (from a sociology perspective) are informative to read and can help to create interesting technology interventions. However I reject the dark scenarios, as I am too much of an optimist trusting in peoples good will, common sense, technology research and engineering – especially if the funding is available ;-).
[1] John Urry. Climate change, travel and complex futures. The British Journal of Sociology, Volume 59, Issue 2, Page 261-279, Jun 2008

Arriving this morning in Brussels I was surprised by the length of the queue for taxis. Before seeing the number of people I considered taking a taxi to the meeting place as I had some luggage – but doing a quick count on the taxi frequency and the number of people in the line I decided to walk to make it in time. Then I remembered that some months ago I had a similar experience in Florence, when arriving at the airport for CHI. There I calculated the expected waiting time and choose the bus. Reflecting briefly on this it seems that this may be a new scheme to promote eco-friendly travel in cities… or why otherwise would there be not enough taxis in a free market? 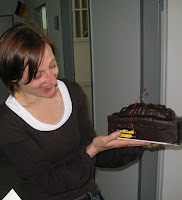 What is a birthday cake without a candle? Sometimes it is hard to find a candle but having a creative team there is always a solution – less than 3 minutes away 😉 As always with new technologies – after deployments ideas for Version 2 (which will include much more functionality) emerge… An there was another business idea – interactive wedding cakes – perhaps we explore this later this year 😉 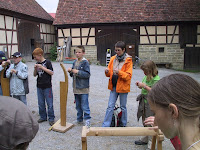 I had a day off an was as “teaching assistant” on a school trip with the kids my wife is teaching. The trip went to a museum village (Wackershofen), which tries to preserve and communicate how people lived about 100 years ago.

On side observation was that in digital photography the limiting factor is now not anymore the memory space but the batteries in the camera. This has changed over the last 2 years – there children still selected which pictures they have to delete – now that is no issue anymore. This shows that some of the trends in pervasive computing (in this case unlimited memory) is already there…

In a project we converted manually flax into threads and theoretically into linen fabric. Some years ago I was involved in doing a similar project – with a focus on the multimedia docummentation – also with a primary school. We learned that it took a person one winter to make one piece of garment. Putting this into perspective we see an interesting trend of devaluation of physical object (cloth are one example, but applies also to high tech goods such as MP3 players) due to advances in engineering. This devaluation of physical goods led to a higher standard of living and consequently to a higher life expectancy. I wonder how further advances – especially in digital engineering will affect the quality of life… 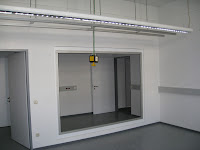 After several month of building work we could finally move into our new lab space. It is still largely empty but provides great opportunities for the research we have planed.

In order to conserve resources we decided to re-use furniture that was already used by another group within the university (which is not there anymore). 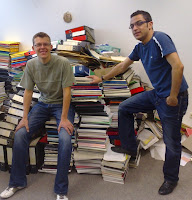 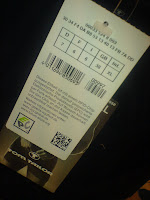 Florian Michahelles, associate director of the AutoID-Labs in Zürich visited our group and gave a presentation in my course on Pervaisve Computing. He introduced the vision of using RFID in businesses, gave a brief technology overview and discussed the potential impact – in a very interactive session. 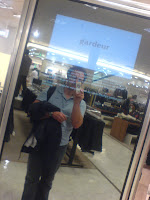 Florian and I worked together in the Smart-its project and during his PhD studies he and Stavros were well know as the experts on Ikea PAX [1], [2]. In 2006 and 2007 we ran workshops on RFID technologies and published the results and a discussion on emerging trends in RFID together [3], [4]. 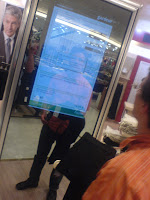 At Kaufhof in Essen you can see a showcase of using RFID tags in garment retail. The installation includes augmented shelves, an augmented mirror, and contextual information displays in the changing rooms. The showcase is related to the European Bridge project. …was fun playing with the system – seems to be well engineered for a prototype.
PS: Florian told me that Vlad Coroama finished his PhD. In a different context we talked earlier about his paper discussing the use of sensors to access cost for insurance [5] – he did it with cars but there are other domain where this makes sense, too.
[1] S. Antifakos, F. Michahelles, and B. Schiele. Proactive Instructions for Furniture Assembly. In UbiComp, Gothenburg, Sweden, 2002.
http://www.viktoria.se/fal/exhibitions/smart-its-s2003/furniture.pdf
[2] Florian Michahelles, Stavors Antifakos, Jani Boutellier, Albrecht Schmidt, and Bernt Schiele. Instructions immersed into the real world How your Furniture can teach you. Poster at the Fifth International Conference on Ubiquitous Computing, Seattle, USA, October 2003. http://www.mis.informatik.tu-darmstadt.de/Publications/ubipost03.pdf
[3]Florian Michahelles, Frédéric Thiesse, Albrecht Schmidt, John R. Williams: Pervasive RFID and Near Field Communication Technology. IEEE Pervasive Computing 6(3): 94-96 (2007) http://www.alexandria.unisg.ch/EXPORT/PDF/publication/38445.pdf
[4] Schmidt, A., Spiekermann, S., Gershman, A., and Michahelles, F. 2006. Real-World Challenges of Pervasive Computing. IEEE Pervasive Computing 5, 3 (Jul. 2006), 91-93 http://www.hcilab.org/events/pta2006/IEEE-PvM-b3091.pdf
[5] Vlad Coroama: The Smart Tachograph – Individual Accounting of Traffic Costs and Its Implications. Pervasive 2006: 135-152. http://www.vs.inf.ethz.ch/res/papers/coroama_pervasive2006.pdf

This evening I went to Münster to meet with Antonio Krüger and Lucia Terrenghi (who is now with Vodafone), who was visiting there. Advertisement is a hot topic and it was interesting that we shared an interesting observation “If the advert/information is the least boring thing to look at people will read it ;-)”. Each of us having their favorite anecdotal evidence: my favorites are people reading the same map everyday at their U-station and the advertising flyers in the Munich S-Train. For context-aware advertisement this is the major challenge to find the time/location where people are bored and happy to see an advert 😉 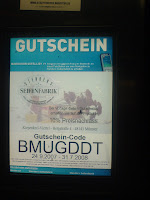 We currently have an ongoing master thesis that looks into this topic – context-aware advertising with cars. There are several interesting examples that this concept could work: e.g. Taxis that show location based ads (you can hire your area where your ad is shown, see [1], [2]). We think it gets really interesting if there are many cars that form a in-town canvas you can paint on. On the way back we checked out the screen adverts (include in the public phones) Jörg Müller works on – even with a navigation feature.
Looking for some more on the topic I realized that Google Patent search works quite well by now: http://www.google.de/patents
[1] Vert, Inc. http://www.vert.net/patented.html
[2] Hacking Taxi Cab Billboards. http://www.theshiftedlibrarian.com/2002/07/31.html#a2715

While browsing the equator website I came again across an interesting publication – I had seen two years ago at MobileHCI – in the domain of pedestrian navigation [1]. The Basic idea is to use a collection of geo-tagged photos to provide visual cues to people in what direction they should go, e.g. “walk towards this building”. This is an interesting application linking two concepts we discussed in the part on location in my lecture on pervasive computing. It follows the approach of augmenting the user in a way that the user does what he does well (e.g. matching visual images) and the computer what it does well (e.g. acquiring GPS location, finding pictures related to a location in a DB).

AJ Brush and John Krumm organize for the people who are in Redmond for the Ubicomp PC meeting a visit to Microsoft. In the morning we got a tour at the home lab – Microsoft’s vision of future home environments – was quite interesting, but had to sign an NDA.

After lunch we went over to Microsoft Research (which is in a new building). We got to see some cool demos. Andy Wilson showed us some new stuff moving the SURFACE forward (physics rocks!). I learned more about depth sensing cameras and Andy showed a fun application [1] – there is video about it, too. Patrick Baudisch talked us through the ideas of LucidTouch [2] and more general about future interaction with small mobile devices. The idea of using the finger behind the screen and the means to increase the precision has many interesting aspects. I found the set of people that work at MSR as impressive as the demos – it seems to be a really exciting work environment.

The atrium of the new building is amazing for playing Frisbee and shoot rubber band missiles. And waiting for the pizza with those toys around proved yet again that researchers are often like kids 😉