If industries are not doing well one way forward is to promote innovation! 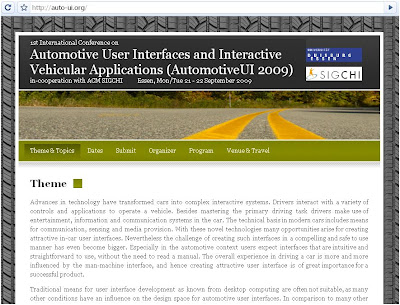 Since a number of years it became apparened that many PhD students in computer science and especially in human computer interaction work on topics related to user interfaces in the car. We think it is a good idea to forster a community in this area and hence we run the 1st International Conference on Automotive User Interfaces and Interactive Vehicular Applications (AutomotiveUI 2009)  in Essen, Germany. The conference is in the week after Mobile HCI and takes place Mon/Tue 21 – 22 September 2009.
Submission deadline: 02 June 2009 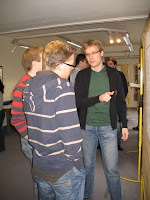 Monday and Tuesday I organized together with Gernot A. Fink a PhD awayday for students in computer science of the Universities Bochum, Dortmund and Duisburg-Essen. With about 30 PhD students and some professors we went to Bommerholz, where the University of Dortmund has a small retreat.

The program included talks about career possibilities after the PhD including talks by: 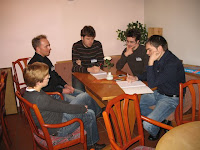 Overall it became very clear that computer science is still the subject to study! The career opportunities are interesting, exciting and very good. Nevertheless there is always a downside to things – whatever way you choose you have to work hard 🙂 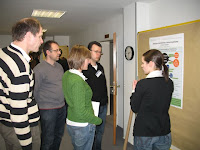 We had a further talk “Gutenberg over? The metamorphose scientific publishing” by Herrmann Engesser from Springer-Verlag. He showed in an interesting way how much change has happened in the last 40 years to publishing. The example of the Encyclopedia Britannica and the Brockhaus Encyclopedia demonstrates impressively that it is impossible to ignore changes in technology and stay successful in business. Looking at many newspapers one can only wonder when the will realize it. 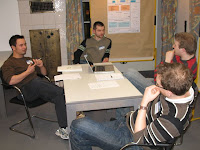 Over coffee we discussed the added value that is provided by a publisher and by digital libraries like Springer Link, ACM DL or the IEEE Library. And here too there are many more open questions than answers. One clear direction is to look more into scientific communities. One idea that I find quite interesting is to search for publications that are from my scientific community, e.g. “give me all paper that have haptic in the title and that are published by people I am linked to in facebook, xing, and linkedin or by their contacts”. Sounds like an interesting project 🙂 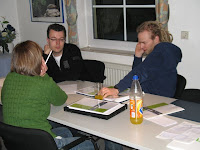 Besides the invited talks we had three poster sessions. In each session 9 students presented their work. We started with 90 seconds presentations and then had discussions over the posters. As we had topics from all areas in Computer science I first expected that this may be pretty boring – but it was surprisingly interesting. I learned a lot about bio-informatics, learning algorithms, data mining, robotics and security over the last two days. Things I would never have read – but getting it explained in the context of a concrete PhD project was fun. 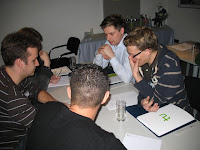 Our evening program was centered on movies. We first showed a number of snippets from movies (including James Bond, Harry Potter, Star Trek, and Minority Report) where cool technology feature. Then the students had 45 minutes to create new ideas of believable technology gadgets for two films, one to plays in 2011 and the other in 2060. The ideas were fun reaching form manipulated insects, to smart dust, to the exploitation of social networks. If you are Steven Spielberg or someone else who plans a movie feel free to call me – we have a lot of ideas 😉