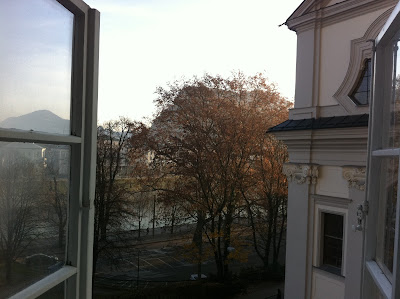 At the automotive user interface conference in Salzburg we presented some of our research. Salzburg is a really nice place and Manfred and his team did a great job organizing the conference! 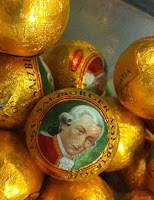 Based on the Bachelor Thesis of Stefan Schneegaß and some follow-up work we published a full paper [1] that describes a KLM-Model for the car and a prototyping tools that makes use of the model. In the model we look at the specific needs in the car, model rotary controllers, and cater for the limited attention while driving. The prototyping tool provides means to quickly estimate interaction times. It supports visual prototyping using images of the UI and tangible prototyping using Nic Villar´s VoodooIO. Looking forward to having Stefan on our team full-time 🙂

We additionally had a demo on a recently completed thesis by Michael Kienast. Here we looked at how speech and gestures can be combined for controlling functions, such as mirror adjustments or windscreen wipers, in the car. This multimodal approach combines the strength of gestural interaction and speech interaction [2].

The evening event of the conference was at Festung Hohensalzburg – with a magnificent view over the twon!

Bryan started his keynote talk the automotive user interface conference (auto-ui.org) in Salzburg with reminding us that having controversial discussions about the HMI in the car is not new. Quoting a newspaper article from the 1930s on the introduction of the radio in the car and its impact on the driver he picked an interesting example, that can be seen as the root of many issues we have now with infotainment systems in the car. 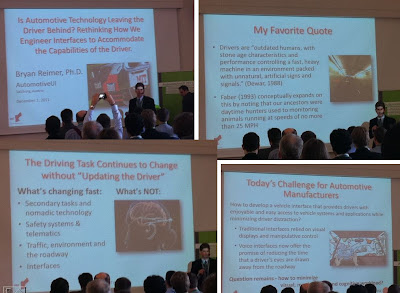 The central question he raised is: how to create user interface that fit human users? He made an important point: humans are not “designed” to drive at high speed in complex environments; perception has evolved for walking and running in natural environment. Additionally to the basic limitations of human cognition, there is a great variety of capabilities of drivers, their skills and cognitive ability (e.g. influence of age). A implication of the global change is demographics is that the average capabilities of a drivers will be reduced – basically as many older people will be drivers…

Over the last 100 years cars have changes significantly! Looking more closely Bryan argues that much of the chance happened in the last 10 years. There has been little change from the 1950s to the 1990s with regard to the car user interface. 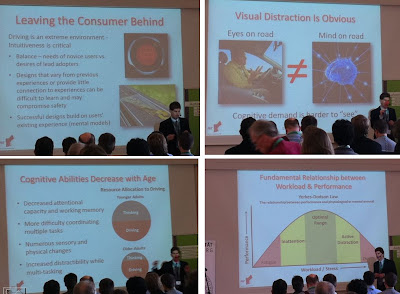 It is apparent that secondary tasks are becoming more important to the user. Users will interact more while driving because the can. It is however not obvious that they are capable of it.

Even given these developments it is apparent that driving has become safer. Passive safety has been improved massively and this made driving much safer. There seems to be a drawback to this as well, as people may take greater risks as they feel safer. The next step is really to avoid accidence in the first place. Bryan argues that the interaction between driver, environment, and vehicles is very important in that. He suggests that we should make more of an effort to create systems that fit the drivers. 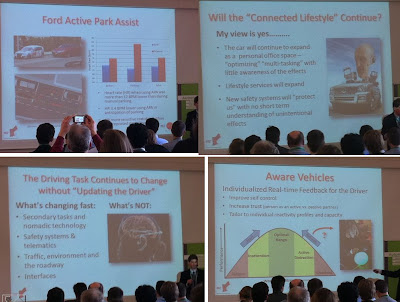 The Yerkes-Dodson Law helps to understand how to design systems that keep peoples attention in the optimal performance. He made an important point: there are certain issues that cannot be solved, e.g. if someone is tired we can do only very little – the driver will need to rest. We should make sure that we take these things into account when designing systems.

Visual distraction is an obvious factor and much discussed in the papers at the conference – but Bryan argued that “eyes on the road” is not equal to “mind on the road”. I think this is really a very important point. Ensuring that people keep their eyes on the road, seeing things is not enough. The big resulting question is how to keep or get people focused on the street and environment. It seems there is some more research to do…

The variety of interfaces and interaction metaphors build into cars opens more choices but at the same time creates problems, as people need to learn and understand them. A simple question such as: How do you switch the car off? may be hard to answer (Bryan had the example of a car with a push button starter, where you cannot remove the key). I think there are simple questions that can be learned from industry and production machines… add an emergency stop button and make it mandatory 😉 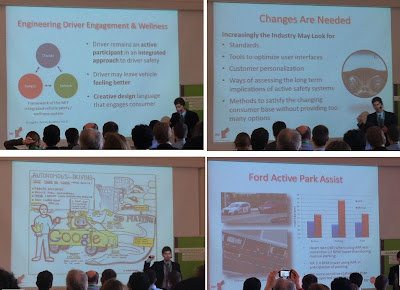 If you are interested more about Bryan’s work look at his webpage or his page at the MIT agelab or one of his recent publications [1] in the IEEE Pervasive Computing Magazine’s special issue on automotive computing, see [2] for an introduction to the special issue.

Sorry for the poor quality photos … back row and an iPhone… 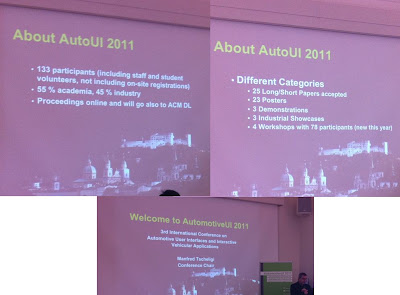 The proceedings of the conference series are online available at http://auto-ui.org