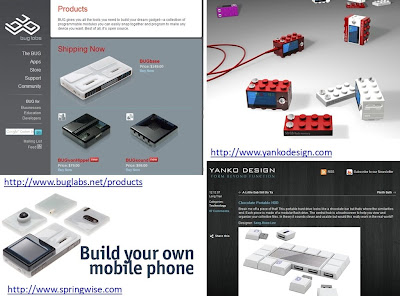 Over the last years there have been many ideas how to make devices more modular. Components that allow the end-user to create their own device – with exactly the functionality they want have been the central idea. So far they are only used in prototyping and have not really had success in the market place. The main reason seems that you get a device that has everything included and does everything – smaller and cheaper… But perhaps as electronics gets smaller and core functions get more mature it may happen.

Buglabs (http://www.buglabs.net) sells a functional system that allows you to build your own mobile device.

Being creative and designing your own system has been of interest in the computing and HCI community for many years. At last years CHI there was an paper by Buechley et al. [1] that looked how the LilyPad Arduino can make creating “computers” an intersting experience – and especially for girls.