Last year Paul did an internship a Nokia in Finland. He worked there on the integration of capacitive sensors in phones and clothing. After Paul was back we jointly followed up on the topic which resulted in an interesting set of guidelines for placing wearable controls [1].

In the work we focused on integrating touch sensitive controls into garments and accessories for a operating the music player integrated in a phone. The study showed that there are prime locations where to place controls on their body: the right hip and above the right knee (for more details see the paper [1]). It furthermore showed that it is not clear expectations of functions (e.g. forward, backward, volume up/down) with regard to controls laid out on the close.

During his internship he also did research on integrating touch into buttons, which was published at Tangible and Embedded Interaction 2008 [2]. 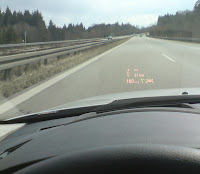 Wolfgang just sent me another picture (taken by a colleague of him) with more information in the head-up display. It shows a speed of 180 km/h and I wonder who took the picture. Usually only the driver can see such a display 😉

For assistance, information and entertainment systems in cars (an I assume we could consider taking photos an entertainment task) there are guidelines [1, 2, 3] – an overview presentation in German can be found in [4]. Students in the Pervasive Computing class have to look at them and design a new information/assistance system that is context aware – perhaps photography in the car could be a theme… I am already curious about the results of the exercise.

(thanks to Wolfgang Spießl for sending the references to me)