We made our plans for setting up a company for creating a unique learning experience more specific. Uwe Bayer from Fraunhofer IAIS used in our discussion the phrase “don’t play to run company – really run a company” – which I think describes the essences of we would like to achieve. We plan to have some detailed information (and the recruitment process) out by the end of the month. If you are a student close to finishing your studies AND you have academic skills in your subject AND you have the drive to create a start-up THEN you should contact me in the beginning of June – we look for about 20 people with IT and business background that like to take a risk!

In the afternoon I visited humangrid, a startup company in Dortmund. Their basic idea is to create a platform that offers opportunities for crowdsourcing – basically outsourcing small tasks that are easy to perform by humans to a large number of clickworkers. One example for such a scenario is tagging and classification of media. It is interesting that they aim to create a platform that offers real contracts and provides guaranties – which makes it in my eyes more ambitious than Amazon’s Mechanical Turk.

One interesting argument is that programming humans (as intelligent processors) to do a certain task that involves intelligence is easier and cheaper than creating software that does this completely automated. Obviously with software there is nearly zero-cost for performing the tasks – after the software is completed, however if the development costs are extremely high paying a small amount to the human processor for each task may still be cheaper. The idea is a bit like creating a prototype using wizard of oz – and not replacing the wizard in the final version.

In our discussion we developed some idea where pervasive computing and mobile technologies can link to the overall concept of the human grid and crowdsourcing creating opportunities for new services that are currently not possible. One of our students will start next month a master thesis on this idea – I am already curious if we get the idea working. 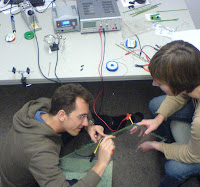 In our course “case studies in pervasive computing” we re-build systems that are described in the research literature and try to improve them or to apply them to new domains. This term the topic is on multi-touch displays. Starting out with Jeff Han’s paper “Low-cost multi-touch sensing through frustrated total internal reflection” we think about novel interaction methods for large screens. And after some initial problems (filter in the web cam we used) we have a first hardware prototype that shows the FTIR effect. The page of Thomas M. Brand is a good starting point if you too think of a DIY-project.

On Monday Giulio Jacucci from the Helsinki Institute for Information Technology told me that they set up a start-up that has an new interesting and different way of doing multi-touch displays – and they look into enormous sizes of displays, up to 16 meters long. Their web page is http://www.multitouch.fi/. Perhaps we should try to get some of there technology for next term – would save us some serious drilling, soldering and polishing…