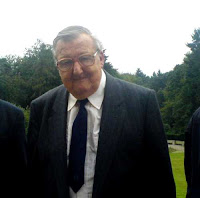 In the castle Birlinghoven on the Fraunhofer campus I had the privilege to meet Prof. Carl Adam Petri. He is a great mathematician and computer scientist who invented the Petri-Net. Today was a reception to celebrate that he received the “2007 Academic Gold Medal of Honor” from “the and Advanced Studies”.

Prof. Petri was from 1963 to 1968 head of the computing centre at the and after this head of a GMD institute in Birlinghoven. (The GMD was merged with Fraunhofer in 2000/2001 and became part of Fraunhofer). To my knowledge he is probably one of the most prominent researchers of the GMD. 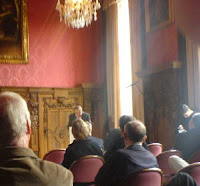 When I studied computer science I got introduced to the concept of Petri-nets but I never really thought about the person who invented it. It was only when I got the invitation to the reception that I really started thinking about the person and inventor and I was really impressed by the person. He got quite a few other awards before: Werner-von-Siemens-Ring, member of the Academia Europaea, Konrad-Zuse-Medaille etc..

I have recorded part of the speech by Prof. Petri where he reflects on his dissertation (be aware of poor audio quality as it is recorded with my phone and I was sitting in a back row)