This afternoon we (over 40 people from VIS and VISUS at the University of Stuttgart) went to Karlsruhe to visit the ZKM. We got guided tours to the panorama laboratory, the historic video laboratory, to the SoundARt exhibition and some parts of the regular exhibition. Additionally Prof. Gunzenhäuser gave a short introduction to the Zuse Z22 that is in on show there, too.

The ZKM is a leading center for digital and media art that includes a museum for media art and modern art, several research institutes, and an art and design school. The approach is to bring media artists, works of art, research in media art and teaching in this field close together (within a single large building). The exhibitions include major media art works from the last 40 years.

The panorama laboratory is a 360 degree (minus a door) projection. Even though the resolution of the powerwall at VISUS [1] is higher and the presentation is in 3D, the360 degree 10 Megapixel panorama screen results in an exciting immersion. Without 3D, being surrounded by media creates a feeling of being in the middle of something that happens around you. Vivien described the sensation of movement similar to sitting in a train. The moment another train pulls out of the station you have a hard time to tell who is moving. I think such immersive environment could become very common once we will have digital display wallpaper.

The historic video laboratory is concerned with “rescuing” old artistic video material. We sometimes complain about the variety of video codecs, but looking at the many different formats for tapes and cassettes, this problem has a long tradition. Looking at historic split screen videos that were created using analog technologies one appreciates the virtues of digital video editing… Two are two amazing films by Zbigniew Rybczyński: Nowa Książka (New Book): http://www.youtube.com/watch?v=46Kt0HmXfr4 and and Tango: http://vodpod.com/watch/3791700-zbigniew-rybczynski-tango-1983

The current SoundArt exhibition is worthwhile. There are several indoor and outdoor installations on sounds. In the yard there is a monument built of speakers (in analogy to the oracle of Delphi) that you can call from anywhere (+49 721 81001818) and get 3 minutes of time to talk to whom even is in the vicinity of the installation. Another exhibit sonfied electron magnetic fields from different environments in an installation called the cloud.

[1] Powerwall at VISUS at the Univeristy of Stuttgart (6m by 2.20, 88 million pixel in, 44 million pixel per eye for 3D). http://www.visus.uni-stuttgart.de/institut/visualisierungslabor/technischer-aufbau.html.

It is 50 years now that Prof. Rul Gunzenhäuser, my predecessor on human computer interaction and interactive systems at the University of Stuttgart, defended his PhD. Some month back I came across his PhD thesis “Ästhetisches Maß und ästhetische Information“ (aesthetic measure and aesthetic information) [1], supervised by Prof. Max Bense, and I was seriously impressed. 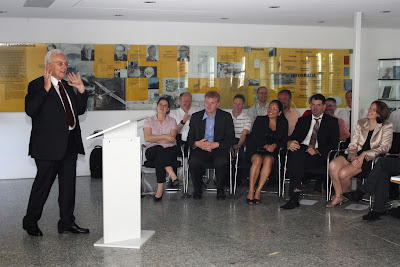 He is one of the few truly interdisciplinary people I know. And in contrast to modern interpretations of interdisciplinary (people from different working together) he is himself interdisciplinary in his own education and work. He studied Math, Physics and Philosophy, worked while he studied in a company making (radio) tubes, completed a teacher training, did his PhD in Philosophy but thematically very close to the then emerging field of computer science and became later a post-doc in the computing center. He taught didactic of mathematics in a teacher training University, was a visiting professor at the State University of New York and finally became in 1973 professor for computer science at the University of Stuttgart staring the department of dialog systems. This unique educational path shaped his research and I would expect his whole person. Seeing this career path I have even more trouble accepting the streamlining of our educational system and find it easier to relate to a renaissance educational ideal.

Yesterday evening we had a small seminar and gathering to mark the 50th anniversary of his PhD. Our colleague Prof. Catrin Misselhorn, a successor on the chair of philosophy held by Max Bense, talked about “Aesthetic as Science?” (with a question mark) and started with the statement that what people did in this area 50 years ago is completely dated, if not largely wrong. I found the analysis very interesting and enlightening as it highlights that scientific results, to be relevant, do not have a non-transient nature. For a mathematician this may be hard to grasp, but for someone in computing and especially in human computer interaction this is a relief. It shows that scientific endeavors have to be relevant in their time but the lasting value may be specifically in the fact, that they go a single step forward. Looking back a human computer interaction a lot of the research in 70ties, 80ties, and 90ties looks now really dated, but we should not be fouled, without this work we would not be in interactive systems where we are now, if this work would not have been done.

The short take away message from the event is:
If you do research in HCI, do something that is fundamentally new. Question the existing approach and creates new ideas and concepts. Don’t worry if this will last forever, accept that your research will likely be ‘only’ one step along the way. It has to be relevant when it is done, it matters less that it may have little relevance some 20 or 50 years later.