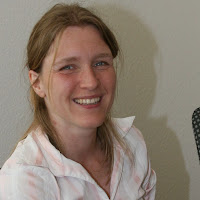 Steffi Beckhaus, who is professor for computer science at the University of Hamburg, visited our group at B-IT. Meeting her was another classical example how small the scientific community in user interface research is. I met Tanja Döring, one of Steffi’s students, at TEI’07 in . They had a very interesting paper on novel user interfaces for art historians – “The Card Box at Hand: Exploring the Potentials of a Paper-Based Tangible Interface for Education and Research in Art History”. Looking then up Steffi Beckhaus details I saw that she was at Fraunhofer IMK (which is now part of IAIS) in Birlinghoven some year ago in the virtual environments group. 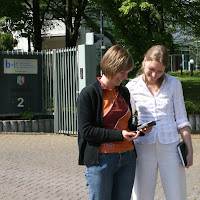 fter lunch we had a few demos (like always on short notice as I forgot to tell before). Florian Alt demoed the current stage of his annotation platform for the web and Paul Holleis showed some examples of the work on modelling physical interaction and cross device prototyping, which we will present at CHI in 2 weeks. We also showed one of the student projects from the last course on developing mobile applications (CardiViz) and the ongoing work of our current lab on context and location awareness. We realized that we have very similar values and methods for teaching. In particular forcing students to bring in their own creativity into projects which they drive and for which we set a corridor seems a very efficient way to teach people who to create novel user experiences.

In her presentation Steffi showed us details about her lab in (we were so impressed that we invited ourselves for a visit). In particular the combination of “classical VR” and tangible and novel user interfaces is intriguing. Overall her work is greatly interesting as it looks into the whole body experience (e.g. sound-floor, chairIO) and connects much more than I expected to our research theme of embedded interaction.

In our discussion Steffi brought up a video of the Pain-Station (http://www.fursr.com/) . It is basically a pong game where you get penalized for low performance with actuator that creates pain (I think with heat and a whip). To be successful you can either play well or take more pain than your opponent 😉 This led us to the discussion of how far one should go in designing novel user experiences.

Taking about tactile output Steffi mentioned the project VRIB (for more info see VRIB at Fraunhofer IMK or at Univeristy of Ilmenau) that was done from 2000 to 2004 on novel interaction devices and metaphors. This includes interesting issues that may be also relevant for our work on tactile output on mobile devices.