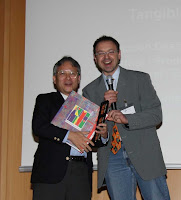 In the evening Prof. Hiroshi Ishii from the MIT Medialab presented a fascinating keynote at TEI’08. He gave an exciting overview of his work in tangible user interfaces, starting from tangible bits [1]. Right after the demos it was impressive to see how much impact he had on this area of research. He has a paper that accompanies the keynote in the proceedings, that will be soon available in the ACM DL.

On central piece of advice on research was to work on visions rather than on applications. He argues visions may last 100 years and applications are likely to be gone after 10. However he made the interesting connection between the two. You need to have applications to convey and communicate the visions, but you need to have the vision to create the applications. He had a great a slide (which indicates that we will go to heaven) to motivate to do something to be remembered in 200 years – not sure if this is my plan. 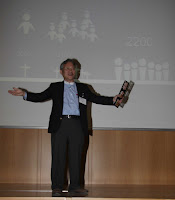 He criticized interdisciplinary research as we do it at the moment. In his few the most efficient way for interdisciplinary way is to make a single person knowledgeable in several fields. This raises issues in education and in the discussion afterwards there was the question whether this is feasible beyond the MIT or not.