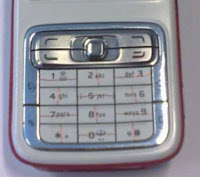 Paul Holleis presented at TEI’08 the results of the research he did during his internship at Nokia Research [1]. Over the summer Paul spent 3 month with Jonna Häkkila’s group in Helsinki, where he worked on two projects: combing touch and key-presses and wearable controls.

Technically both projects used capacitative sensing to recognize touch. In his paper “Studying Applications for Touch-Enabled Mobile Phone Keypads” [1] they added to common mobile phone buttons touch sensing so that multiple levels of interaction can be measured, such as approaching, touching and pressing. The paper additionally discusses new interaction possibility that arise from this.