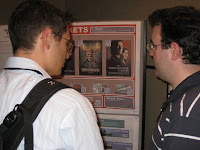 Gregor, a colleague from LMU Munich, presented work that was done in the context of the PERCI project, which started while I was in Munich. The demo showed several applications (e.g. buying tickets) that exploit the potential of interaction with multiple NFC-Tags. The basic idea is to have several NFC-Tags included in a printed poster with which the user can interact using a phone. By touching the tags in a certain order the selection can be made. For more details see the paper accompanying the demo [1].