Today and yesterday I am visiting a conference that is concerned with ageing – looking at the topic from different perspective (computer science, psychology, medicine, economics) run at the MPI in Berlin. The working group is associate with the the German Academy of Sciences Leopoldina and I was invited by Prof. Ulman Lindenberger who is director at the Max Planck Insititut and works in Lifespan Psychology. The working group is called ageing in Germany (in German). 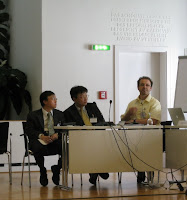 Antonio Krüger and I represented the technology perspective with example from the domain of ubiquitous computing. My talk “ubiquitous computing in adulthood and old age” is a literature review in pictures of selected ubicomp systems targeted as an introduction to non-CS people to the domain. The discussions were really inspiring. In one talk Prof. Jim-Chern Chiou from National Chiao Tung Univeristy in Taiwan (the brain research lab) presented interesting dry electrodes that can be used for EEG – but also for other applications where one need electrodes.

Antonio reported an interesting experiment on the navigation/walking performance of people. The basic message is: if you are old and you can hold on to something while walking you gain cognitive resource – if you are young this effect is not given – has quite interesting impliciations [1]. Antonio worked on more in this domain, see [2].
Over lunch we discussed some ideas related to persuasive technologies and Ulman Lindenberg hinted me some relevant authors (Bargh, Gollwitzer) and I found an interesting manual on subliminal prime on the web.

Slides from my talk: ubiquitous computing in adulthood and old age (PDF).