BJ Fogg gave the opening keynote at mobile HCI 2008 in Amsterdam. The talk explained very well the concept of Captology (computers as persuasive technologies) and the newer projects are very inspiring. He put the following questions at the center: How can machines change people’s minds and hearts? How can you automate persuasion? His current focus is on behavior change. 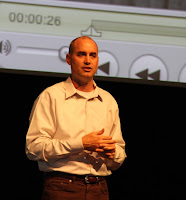 He reported of a class he is teaching at Stanford on designing facebook applications. The metric for success (and on this students are marked) is the uptake of the created application over the time of the course. He reported that the course attracted 16 million users in total and about 1 million on a daily basis – that is quite impressive. This is also an example of the approach he advocates: “rather try than think”. The rational is to try out a lot of things (in the real market with real users, alpha/beta culture) rather than optimize a single idea. Here the background is that nowadays implementation and distribution is really easy and that the marked decides if it is hot or not… His advice is to create minimal application – simple application and then push it forward. All big players (e.g. google, flickr) have done it this ways…

With regard to the distribution methods for persuasion he referred over and over to social networks (and in particular facebook). His argument is that by these means one is able to reach many people in a trusted way. He compared this to the introduction of radio but highlighted the additional qualities. Overall he feels that Web 2.0 is only a worm up for all the applications to come on the mobile in the future.

At the center of the talk was that prediction that mobile devices will be within 15 years the main technology for persuasion. He argued that mobile phones are the greatest invention of human kind – more important than the writing and transportation systems (e.g. planes, cars). He explained why mobile phones are so interesting based on three metaphors: heart, wrist watch, magic wand.

Heart – we love our mobile phones. He argued that if users do not have their phone with them they miss it and that this is true love. Users form a very close relationship with their phone and spend more time with the phone than with anything/anyone else. He used the image of “mobile marriage”…

Wrist watch – the phone is always by our sides. It is part of the overall experience in the real world provding 3 functions: Concierge (reactive, can be asked for advice, relationship base on trust), Coach (proactive, coach comes to me tells me, pushing advice), and Court Jester (entertains us, be amused by it, create fun with content that persuades).

Magic wand – phones have amazing and magical capabilities. A phone provides humans with a lot of capabilities (remote communication, coordination, information access) that empower many things.

Given this very special relationship it may be a supplement for our decision making (or more general our brain). The phone will advise us what to do (e.g. navigation systems tell us where to go) and we love it. We may have this in other areas, too – getting told what movie to see, what food to eat, when to do exercise, … not fully convinced 😉

He provided some background on the basics of persuasion. For achieving a certain target behavior you need 3 things – and all at the same time: 1. sufficient motivation (they need to want to do it), 2. Ability to do what they want (you either have to train them or to make it very easy – making easer is better) and 3. a trigger. After the session someone pointed out that this is similar to what you have in crime (means, motive, opportunity 😉

For creating persuasive technologies there are 3 central pairs describing motivation:

When designing systems it is essential to go for simplicity. He named the following five factors that influence simplicity: (1) money, (2) physical effort, (3) brain cycles, (4) social deviation, and (5) non-routine. Antonio pointed out that this links to work of Gerd Gigerenzer at MPI work on intuitive intelligence.

One thought to “Keynote at MobileHCI2008: BJ Fogg – mobile miracle”