The February 2009 edition of technology review (German version) has its focus on new user interfaces and titles “Streicheln erwünscht” (translates to stroking/caressing/fondling welcome). It has a set of articles talking about new way of interacting multimodality, including tangible user interfaces and tactile communication. In the article “Feel me, touch me” by Gordon Bolduan on page 74 a photo of Dagmar’s prototype of tactile steering wheel is depicted. The full paper on the study will be published at Pervasive in May 2009 (so you have to be patient to get the details – or come and visit our lab 😉 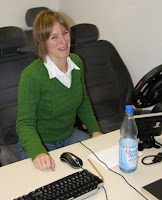 In the blog entry of technology review  introducing the current issue there is a nice anecdote mentioned about a literature search on haptic/tactile remote communication (while I was still in Munich) – the final version of the seminar paper (now not X-rated anymore) is “Neue Formen der entfernten Kommunikation” by Martin Schrittenloher. He continued in his MSc Project on the topic and worked with Morten Fjeld  on sliders that give remote feedback, see [1]. 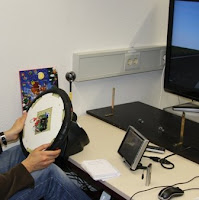 Another topic closely related is to new forms of communication are exertion interfaces (we looked at the 2002/2003 work Florian ‘Floyd’ Mueller in the UIE lecture yesterday – even with the Nintendo Wii around the work is highly inspiring and impressive, see [2]). The communication example given in Breakout for Two is showing the potential of including the whole body in communication tasks. Watching the video  is really to recommend 🙂
[1] Jenaro, J., Shahrokni, A., Schrittenloher, and M., Fjeld, M. 2007. One-Dimensional Force Feedback Slider: Digital platform. In Proc. Workshop at the IEEE Virtual Reality 2007 Conference: Mixed Reality User Interfaces: Specification, Authoring, Adaptation (MRUI07), 47-51
[2] Mueller, F., Agamanolis, S., and Picard, R. 2003. Exertion interfaces: sports over a distance for social bonding and fun. InProceedings of the SIGCHI Conference on Human Factors in Computing Systems (Ft. Lauderdale, Florida, USA, April 05 – 10, 2003). CHI ’03. ACM, New York, NY, 561-568. DOI= http://doi.acm.org/10.1145/642611.642709