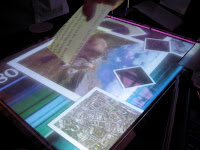 What is a simple and cheap way to get from Saarbrücken to Linz? It’s not really obvious, but going via Stansted/Cambridge makes sense – especially when there is the conference on Tangible and Embedded Interaction (www.tei-conf.org) and Raynair offers 10€ flight (not sure about sustainability though). Sustainability, from a different perspective was also at the center of the Monday Keynote by Tom Igeo which I missed.

Nicolas and Sharam did a great job and the choice to do a full day of demos worked out great. The large set of interactive demos presented captures and communicates a lot of the spirit of the community. To get an overview of the demos one has to read through the proceedings (will post a link as soon as they are online in the ACM-DL) as there are too many to discuss them here.
Nevertheless here is my random pick: 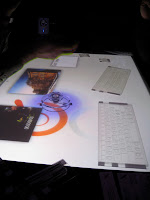 One big topic is tangible interaction on surfaces. Several examples showed how interactive surfaces can be combined with physical artifacts to make interaction more graspable. Jan Borcher’s group showed a table with passive controls that are recognized when placed on the table and they provide tangible means for interaction (e.g. keyboard keys, knobs, etc.). An interesting effect is that the labeling of the controls can be done dynamically. 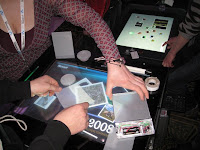 Microsoft research showed an impressive novel table top display that allows two images to be projected – on the interactive surface and one on the objects above [1]. It was presented at large year’s UIST but I have tried it out now for the first time – and it is a stunning effect. Have a look at the paper (and before you read the details make a guess how it is implemented – at the demo most people guessed wrong 😉 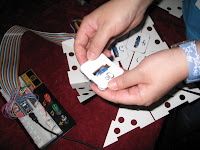 Embedding sensing into artifacts to create a digital representation has always been a topic in tangible – even back to the early work of Hiroshi Ishii on Triangles [2]. One interesting example in this year’s demo was a set of cardboard pieces that are held together by hinges. Each hinge is technically realized as a potentiometer and by measuring the potion the structure can be determined. It is really interesting to think this further.
Conferences like TEI let you inevitably think about the feasibility of programmable matter – and there is ongoing work in this in the robotics community. The idea is to create micro-robots that can create arbitrary shapes – for a starting point see the work at CMU on Claytronics.
[1] Izadi, S., Hodges, S., Taylor, S., Rosenfeld, D., Villar, N., Butler, A., and Westhues, J. 2008. Going beyond the display: a surface technology with an electronically switchable diffuser. In Proceedings of the 21st Annual ACM Symposium on User interface Software and Technology (Monterey, CA, USA, October 19 – 22, 2008). UIST ’08. ACM, New York, NY, 269-278. DOI= http://doi.acm.org/10.1145/1449715.1449760
[2] Gorbet, M. G., Orth, M., and Ishii, H. 1998. Triangles: tangible interface for manipulation and exploration of digital information topography. In Proceedings of the SIGCHI Conference on Human Factors in Computing Systems (Los Angeles, California, United States, April 18 – 23, 1998). C. Karat, A. Lund, J. Coutaz, and J. Karat, Eds. Conference on Human Factors in Computing Systems. ACM Press/Addison-Wesley Publishing Co., New York, NY, 49-56. DOI= http://doi.acm.org/10.1145/274644.274652