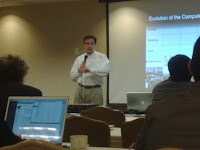 Bob Iannucci from Nokia presented his keynote “ubiquitous structured data: the cloud as a semantic platform” at HotMobile 2009 in Santa Cruz. He started out with the statement that “Mobility is at the beginning” and he argued that why mobile systems will get more and more important.

Hearing this, especially the first point, from someone from Nokia seemed very interesting. His observations are in general well founded – especially the argument for simple usage models and sensible conceptual models when targeting the whole population of the earth as users.

In the keynote he offered an alternative conceptual model: Humans are Relational. Model everything as relations between people, things and places. He moved on to the question what are the central shortcomings in current mobile systems/mobile phones and he suggested it comes down to (1) no common data structure and (2) no common interaction concept.

With regard to interaction concepts he argued that a Noun-Verb style interaction is natural and easy for people to understand (have heard this before, for a discussion about it in [1, p59]). The basic idea in this mode is to choose a noun (e.g. people, place, thing) and then decide what to do with it (verb). From his point of view this interaction concept fits well the mobile device world. He argued that a social graph (basically relationships as in facebook etc.) would be well suited for a noun-verb style interaction. The nodes in the graph (e.g. people, photos, locations, etc.) are nouns and transformations (actions) between the nodes are the verbs. He suggested if we represent all the information that people have now in the phone as a graph and we have an open standard (and infrastructure) to share we could create a universal platform for mobile computing. (and potentially a huge graph with all the information in the world 😉

I liked his brief comment on privacy: “many privacy problems can be reduced to economic problems”. Basically people give their information away if there is value. And personally I think in most cases people give it away even for a minimal value… So far we have no market place where people can sell their information. He mentioned the example of a personal travel data which can provide the basis for traffic information (if aggregated). I think this is an interesting direction – how much value would have my motion pattern have?

Somehow related to what you can do on a mobile phone he shared with us the notion of the “3-Watt limit”. This seems fundamental: you cannot have more than 3 Watt used up in a device that fits in your hand (typical phone size) as otherwise it would get to hot. So the processing power limitation is not on the battery, but on the heat generated.