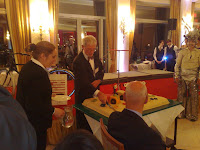 It was a great honor to be invited to Prof Thomas Christaller’s 60th Birthday. During my time at Fraunhofer IAIS I had the pleasure of working with him and learning from him! He has many interests and skills! See his web page at Fraunhofer IAIS and at Lebenskunst.

The symposium at Schloß Birlinghoven featured an impressive list of people and I learned more about the history of German computer science. It is impressive to see that many people that shaped AI in Germany worked at some point together in one project (HAM-RPM, HAM-ANS, see [1]). This highlighted to me again the importance of education people in research and not just getting research done – as nicely described by Patterson in “Your students are your legacy” [2] – an article worthwhile to read for anyone advising students.

The afternoon and evening was much too short to catch up with everyone. It was great to meet Christian Bauckhage, who took over my office in Bonn, in person. He is now professor at B-IT and at Fraunhofer IAIS and I hope we have a chance to work together in the future. At WWW2009 he published a paper on a new approach to social network analysis [3] applied to Slashdot. This approach which discriminates negative and positive connections could also be an interesting approach in social networks that are grounded in the real world… seems there is already an idea for a joined project.

After telling Karl-Heinz Sylla that I am currently teaching a software engineering class he recommended me the following book: Clean Code: A Handbook of Agile Software Craftsmanship by Robert C. Martin [4]. The books looks good and one interesting argument is that programming well in the small (clean code) is a pre-requisite for large systems – or the other way round you break big software systems by bad programming in the small. Perhaps there is some time over the summer to read the book.

PS: Thomas chose an interesting option for birthday presents: bicycles for Africa – a quite remarkable project. I will see if I find the URL and post it in a comment…