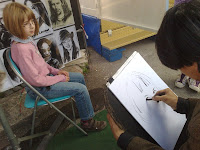 On the weekend I went with Vivien to a fairground at the Volksfest in Crailsheim (smaller Version of the Oktoberfest). Vivien is now old enough for some of the attractions – giving me an excuse to try them out 🙂 The forces on the body are pretty exciting when you feel them for the first time or after 20 years again… 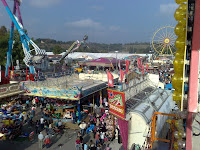 It is amazing how much (mechanical) engineering is in these attractions, even though many are still the same as when I was a child (about 30 years ago). It seems that computer science plays a very minor role (besides controlling the mechanics). Virtual reality does not feature at all. What people are attracted to is physical (e.g. a fraction of a second of zero G, great heights, and a life boxing fight). 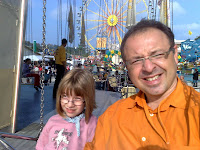 When I was in Lancaster working in the Equator project I worked with Brendan Walker – and he is the world’s only thrill engineer. He is an aeronautical engineer (Imperial College, London) and Industrial Design Engineer (Royal College of Art, London) by training and had a research grant to investigate how thrill works and how to create thrill. Some of his results are published in a booklet [1] and the work is continued in the Thrilllaboratory [2]. Earlier this year he gave an interview to that gives an intro of his work – a quick and fun read. There are some youtube videos of his work, e.g. http://www.youtube.com/watch?v=0v1M59Aaa2A 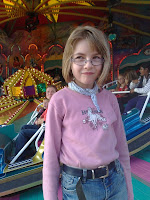