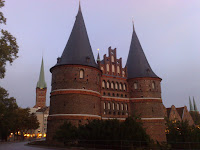 Following our first workshop on this topic in Nara during Pervasive 2009 earlier this year we had on Friday the 2nd Pervasive Advertising Workshop in Lübeck as part of the German computer science conference Informatik 2009.

The program was interesting and very diverse. Daniel Michelis discussed in his talk how we move from an attention economy towards an engagement economy. He argued that marketing has to move beyond the AIDA(S) model and to consider engagement as central issue. In this context he introduced the notion of Calm Advertising and interesting analogy to Calm Computing [1]. Peter van Waart talked about meaningful adverting and introduced the concept of meaningful experience. To stay with the economy term consider advertising in an experience economy. For more detail see the workshop webpage – proceedings will be soon online.

Jörg Müller talked about contextual advertising and he had a nice picture of the steaming manhole coffee ad – apparently from NY – but it is not clear if it is deployed.

If you are interested in getting sensor data on the web – and having them also geo-referenced – you should have a look at http://www.52north.org. This is an interesting open source software system that appears quite powerful.