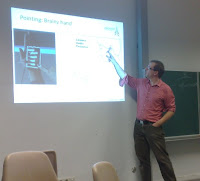 On Wednesday and Thursday Enrico visited our group in Essen. He gave a part of my lecture on user interface engineering talking about mobile interaction with the real world. He include interesting examples, such as QR-code/NFC/RFID use in Asia, SixthSense project (camera projection system to wear around the neck) and handheld mobile projections. Enrico also explained some of the multi-tag work he does at Lancaster University [1].

In the lecture we talked briefly about future devices and interfaces. I mentioned one example: projection in the large – on building scale. The 3D visualization overplayed on buildings seem impressive – at least when looking at the video. NuFormer (http://www.projectiononbuildings.com/en) has created several interesting projections – but I never have seen one in the real – so far…

Looking at the 6th sense project and on the building projections we wondered how important in may become in the future to make research results in ubicomp/HCI understandable and accessible to a wide audience. Will this replace papers in the future?

One thought to “Enrico Rukzio visits us in Essen, projections everywhere”