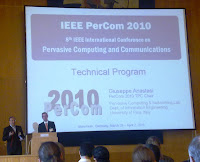 About 300 people are at Percom 2010, which is held in the palace in Mannheim – and amazing location! The conference had 233 submission and is truly international (1/3 of the papers come from Europe, 1/3 from America, and 1/3 from Asia/pacific) and highly competitive (acceptance rate of about 12%). 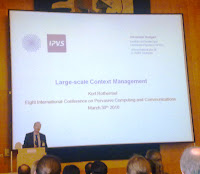 Kurt Rothermel from the University of Stuttgart presented the opening Keynote on Large-scale Context Management. He presented a set of interesting example from Nexus (Collaborative Research Center 627, Spatial World Models for Mobile Context-Aware Applications) that showed the challenge in large scale systems. The size of the problem is can be easily seen when considering that half the population of the planet is using a mobile device and hence needs to be located… Now imagine everyone is contributing sensor data at a rate of one update per minute… For more details on their work see their 2009 percom paper [1]. In his talk he gave also some references to other interesting research platforms in this space: SensorWeb/SensorMap by Microsoft [2] and SensorPlanet by Nokia [3].