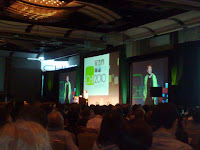 2343 attendees came to CHI 2010 this year to Atlanta. Participants are from 43 countries and the colored map suggested that a good number came from Germany. Outside it really feels like spring 🙂 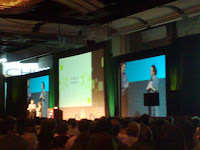 Genevieve Bell from Intel is a cultural anthropologist and she presented the CHI opening keynote with the title: “Messy Futures: culture, technology and research”. She is a great story teller and showed exemplarily the value of ethnography and anthropology research. One very graphical example was the picture of what are the real consumers – typically not living in a perfect environment, but rather living clutter and mess …

A further issue she briefly addressed was the demographic shifts and urbanization (soon three quarter of people will live in cities). This followed on to an argument for designing for the real people and for their real needs (in contrast to the idea of designing for women by “shrinking and pinking it”).

Genevieve Bell discussed critical domains that drive technology: politics, religion, sex, and sports. She argued that CHI and Ubicomp has not really looked at these topics – or at least they did not publish it in CHI 😉 Here examples were quite entertaining and fun to listen to the keynote – but it created little controversy.