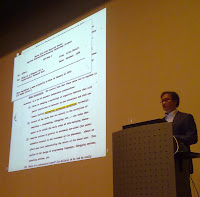 Ed H. Chi from PARC presented the opening keynote for Mensch&Computer 2010. In the motivation of the talk he showed a document on “Applied Information processing psychology” from 1971 – probably very few had seen this before. It makes an argument for an experimental science that is related to augmented cognition. The basic idea is very similar to Vannevar Bush’s Memex – to extend the human cognitive power by machines (and especially computer technology). It is apparent that these ideas became the backdrop of the many innovations that happened at PARC in the early days. 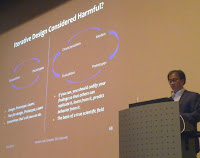 Ed stressed that there is still a lot of potential for the application of psychological phenomena and models to human computer interaction research. As an example he used the idea that speech output in a navigation system could use your name in an important situation making use of the attenuation theory of attention (the cocktail party effect). By hearing your name you are more likely to listen – even if you are yourself in a conversation. The effect may be stronger if the voice is your mother’s voice 😉 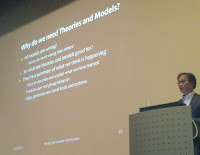 The main part of the talk centered on model driven research in HCI. Using the ScentHighlights [1] examples he outlined the process. I liked very much the broad view Ed has on models and the various uses of models he suggested, e.g. generative models that generate ideas; or behavioral models that lead to additional functionalities (as example he used: people are sharing search results in google, hence sharing should be a basic function in a search tool). Taking the example of Wikipedia he showed how models can be used to predict interaction and growth. I found the question on the growth of knowledge very exciting. I think it is defiantly not finite 😉 otherwise research is a bad career choice. Looking at the Wikipedia example it is easy to imagine that the carrying capacity is a linear function and hence one could use a predictive function where a logistic growth curve is overlayed with a linear function.

Random link from the talk: http://mrtaggy.com/