The first day of the symposium was exciting and we saw a wide range of contributions from context-awareness to machine vision. In following I have a few random notes on some of the talks… Thad Starner, new idea on BCI
Thad Starner gave a short history of his experience with wearable computing. He argued that common mobile keyboards (e.g. mini-querty, multi-tap, T9) are fundamentally not suited real mobile tasks. He showed the studies of typing with the twiddler – the data is impressive. He is arguing for cording keyboards and generally he suggests that “Typing while walking is easier than reading while walking“ . I buy the statement but I still think that the cognitive load created by the twiddler does not make it generally suited. He also showed a very practical idea of how errors on mini-keyboards can be reduced using text prediction [1] – that relates to the last exercise we did in the UIE class. (photos of some slides from Thad’s talk)

He has suggested a very interesting approach to “speech recognition” using EEG. The basic idea is that people use sign language (either really moving their hands or just imagine to move their hands) and that the signals of the motor cortex are measured using a brain interface. This is so far the most convincing idea for a human computer brain interface idea that I have seen… I am really curious to see Thad’s results of the study! He also suggested an interesting idea for sensors – using a similar approach as in hair replacement technology (have no idea about this so far, but I probably should read up on this). 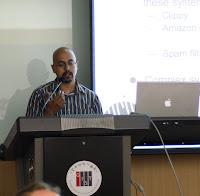 Anind Dey – intelligible context
Anind provided an introduction to Context-Awareness. The characterized them as situationally appropriate applications that adapt to context and eventually increase the value to user. Throughout the talk he made a number of convincing cases that context has to be intelligible to the users, otherwise problems arise when the systems guess wrong (and they will get it wrong sometimes).

He showed an interesting example how data collected from a community of drivers (in this case cab drivers) is useful to predict the destination and the route. These examples are very interesting and show a great potential for learning and context prediction from community activity. I think sharing information beyond location may have many new applications.
In one study they use a windscreen project display (probably a HUD – have to follow up on this) We should find more about it as we look in such displays ourselves for one of the ongoing master projects. (photos of some slides from Aninds’s talk) 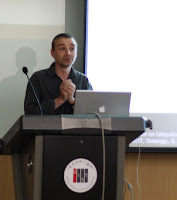 Vincent Lepetit – object recognition is the key for tracking
Currently most work in computer vision used physical sensors or visual markers. The vision however is real clear – just do the tracking based on natural features. In his talk he gave an overview how close we are to this vision. He showed examples of markerless visual tracking based on natural features. One is a book – which really looks like a book with normal content and no markers – which has an animated overlay.
His take-away message was “object recognition is the key for tracking” and it is still difficult. (photos of some slides from Vincent’s talk) 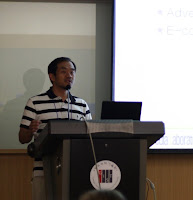 Jun Park – bridge the tangibility gap
In his talk he discussed the tangibility gap in design – in different stages of the design and the design evaluation it is important to feel the product. He argues that rapid prototyping, using 3D printing, is not well suited, especially as it is comparably slow and it is very difficult to render material properties. His approach alternative is augmented foam using a visually non-realistic but tangible foam mock-up combined with augmented reality techniques. Basically the CAD model is rendered on top of the foam.

The second part of the talk was concerned with e-commerce. The basic idea is that users can overlay a product into their own environment, to experience the size and how well it matches the place. (photos of some slides from Jun’s talk)