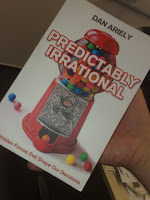 In the afternoon I gave a talk at NEC labs in Heidelberg on ubiquitous display networks. Over the last year we developed and number of ideas and prototypes of interactive public display systems. We run a lab class (Fallstudien) on pervasive computing technologies and advertising together with colleagues from marketing. In another class (Projektseminar) we investigated how to facilitate interaction between interactive surfaces (e.g. multi touch table) and mobile devices. One of the prototypes will be shown as poster at mobile HCI 2009 in Bonn. In some thesis projects we introduced the notion of mobile contextual displays and their potential applications in advertising, see [1] and [2].

Seeing the work at NEC and based on the discussion I really think there is a great of potential for ubiquitous display networks – at the same time there are many challenges – including privacy that allways ensures discussion 😉 It would be great to have another bachelor or master thesis to address some of them – perhaps jointly with people from NEC. To understand the information needs in a particular display environment (at the University of Duisburg-Essen) we currently run a survey to better understand requirements. If you read German you are welcome to participate in the survey.

Predicting the future usually features in my talks – and interestingly I go a recommendation from Miquel Martin for a book that takes its own angle on that: Predictably Irrational by Dan Ariely (the stack of book gets slowly to large – time for holidays).

One thought to “Visit to NEC labs in Heidelberg”