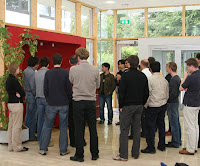 This morning we presented selected demos of the lab on location and context awareness to people at the Fraunhofer . Besides the fact that our main infrastructure component (the Ubisense indoor system) did not work the demos went well. It was very strange – the infrastructure worked for the last 6 weeks (including several reboots) and this morning after rebooting the server it did not find the sensors anymore for several hours. 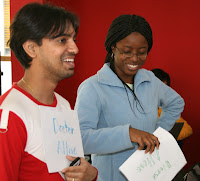 The majority of demos were based on the second assignment which was to create a novel application that makes use of an indoor location system. The applications implemented by the students included a heat-map (showing where a room is mainly used), co-location depended displays (enabling minimal setup effort and admin effort), museum information system (time and location depend display of different levels of information), and a security system (allowing a functionality only inside a perimeter dynamically defined by tags). Overall it was very interesting what the students created in 4 weeks of hard work. 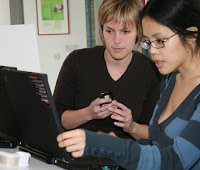 We also briefly showed the location post its which were based on GPS and were done for the first group assignment, the CardioViz prototype (from the lab in the winter term), and the Web annotation tool that is now nearly ready.

Even though there were some difficulties in running some of the demos I am still convinced in a research environment we need to show live demos and not just ppt-slide-ware 😉 We probably have to demo more to get more professional with non-working components.

More pictures are online at http://foto.ubisys.org/iais_presentation/